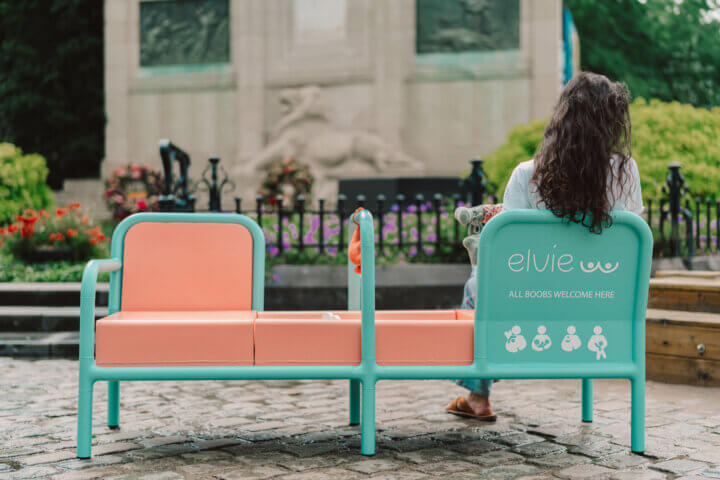 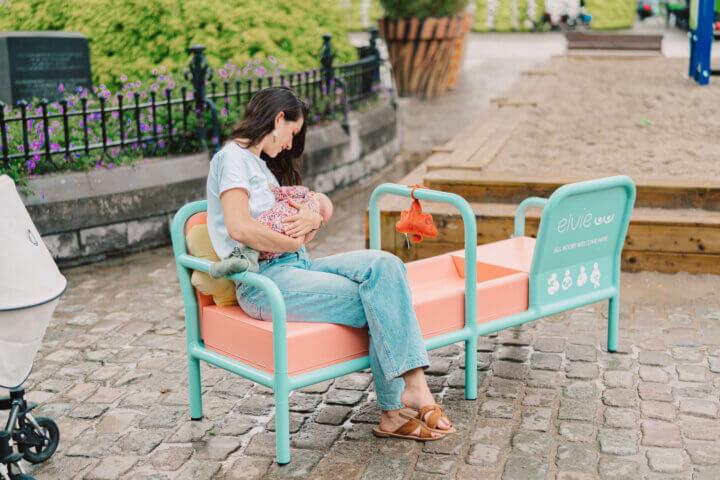 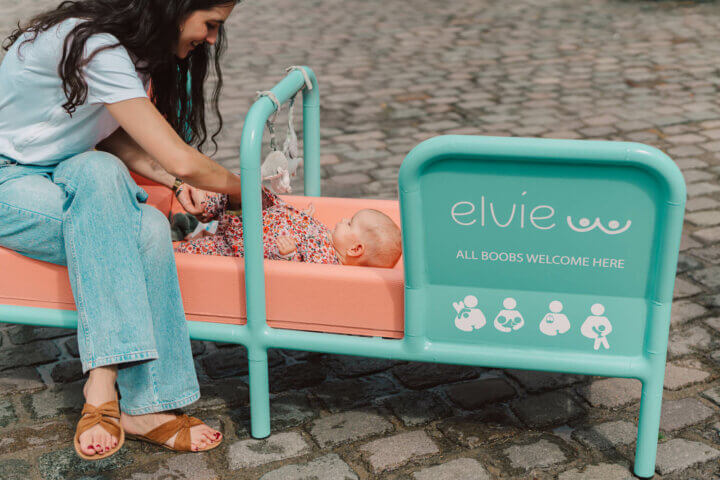 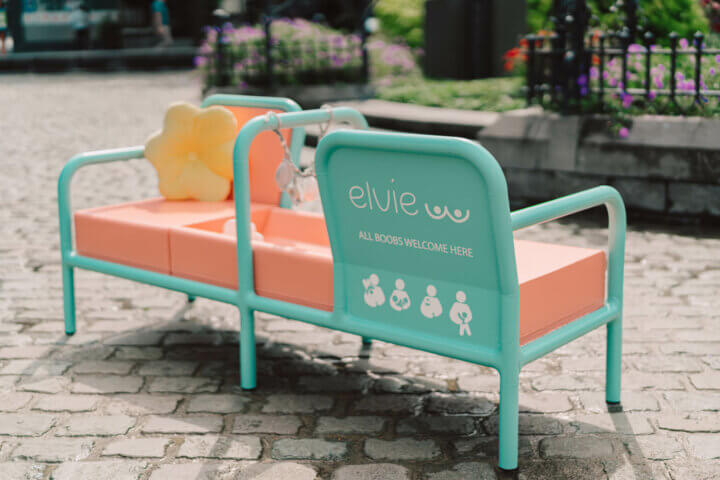 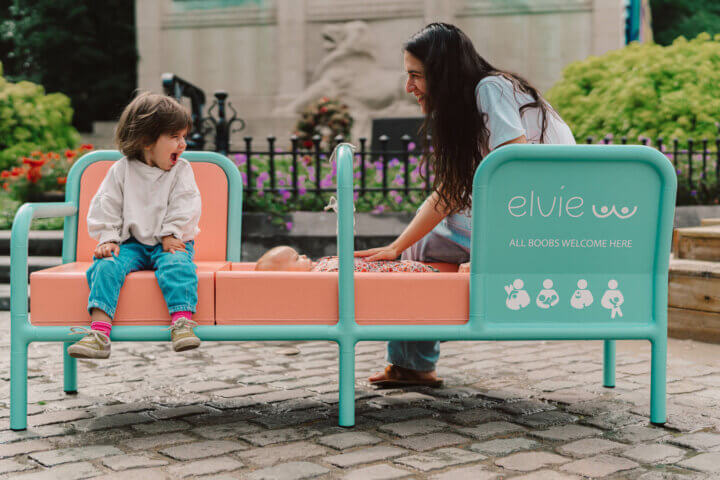 Since launching in 2013, Elvie has continued to lead the femtech category by delivering groundbreaking innovations to support women in their everyday lives and change conversations around women’s health in general.

The World Breastfeeding Week, which takes place every year in August, was therefore highlighted in our agenda. We decided to use that momentum to make a positive statement and break the taboo that still exists around breastfeeding (and pumping) in public.

Elvie wants to empower women to feel safe and comfortable breastfeeding or pumping in public and encourage the Belgian public to support them. This is a pretty serious issue and sometimes, the best way to highlight a serious issue is to do something out of the box. Anyone who saw our campaign will have received the message loud and clear.

“It’s always been our belief that every mother, parent, and family should be able to choose how and where to feed their baby— without judgment or restriction. Likewise, parents should always have the freedom to be out and about without worries. By installing this purpose-built breastfeeding bench and launching the Breast Places website, we hope to truly support mothers of young children to breastfeed or pump in public— while fulfilling our core belief in the process.”

Together with design studio Atelier Leda, we designed a Breastfeeding Bench that encourages women to feed or pump in public, because it is the most natural thing in the world. The launch of this first Elvie Breastfeeding Bench was an invitation to stand with all those women that have felt shamed or confined when breastfeeding or pumping. We integrated an armrest, some toys and a changing pad to make the user experience as comfortable and pleasant as possible. Throughout the month of August the bench could be found and used on Kortrijk’s Grote Markt. 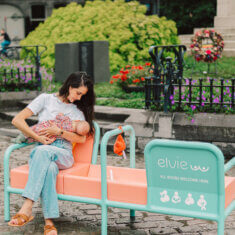 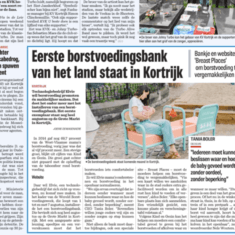 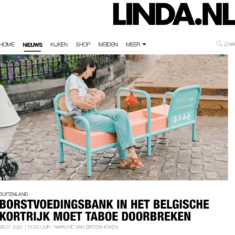 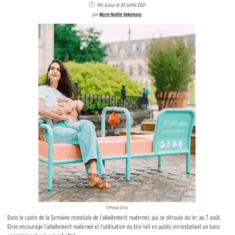 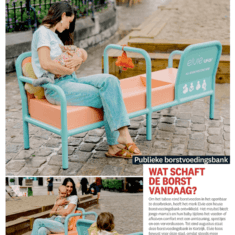 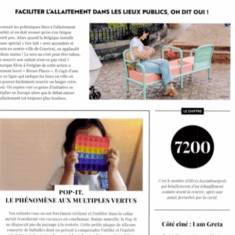 How do we prevent the media from picking on this negatively, as every bench should in fact be a Breastfeeding Bench? Would it be possible to reach French-speaking media as well, with a Flemish stunt? The launch of the bench is certainly a good thing, but how do we make women feel truly welcome in public places? What about vandalism, because the bench obviously stands out in the street scene? How can we support our press release with figures on breastfeeding in Belgium, given that Elvie is a British brand and does not have any Belgian figures? And how do we avoid completely missing ‘the moment’?

We decided to write our press release in such a way as to make it clear that the launch of the bench is a playful yet powerful message. We also launched the ‘Breast Places’ platform, where young parents who want to feed their child (or breast pump) without fear or judgement in public, can quickly locate a spot. Besides that, we also joined forces with Kind & Gezin to obtain recent data on breastfeeding in Belgium to support our press release. We sent out the press release under embargo to both regional and national press 2 weeks before the actual launch of the bench.

“Parents help their children grow up. Feeding them is definitely part of it. Breastfeeding, especially at the beginning, can be up to 12 times a day (sometimes more). Whether it is in the shopping street, at home, in the library, on the train or in an amusement park … when a child gets hungry, it should be perfectly normal for mothers to breastfeed their children.”

The result? Both Flemish and Walloon Belgian media covered the story both in print and online. Over 40 qualitative Belgian clippings equaling a value of over € 380.000 in ad value and 7,783,172 eyeballs were scored. With 10 print clippings, 25 online clippings, 4 radio items, we exceeded the KPIs by a wide margin. We even secured a national news item on VTM news. And the story also had an international impact and was picked up 16 times by media from France, Turkey, the Netherlands, Italy, Greece, Hungary, Slovakia & others.

At the end our campaign got the media attention it truly deserved. We hope our campaign empowered women to feel safe and comfortable breastfeeding or pumping wherever they are.